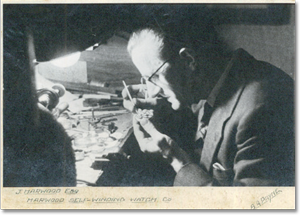 Harwood, a watchmaker of Bolton, Lancashire, had for some years, before taking out his patent of 1924, considered the possibility and the advantages of automatic winding. These advantages include the improved maintenance of the balance amplitude, through the continuously wound state of the mainspring, and the exclusion of dirt by dispensing with the winding stem. The weight, which was to be oscillated by the movement of the wrist and so wind the spring, was, in the early experiments, pivoted near the edge of the movement after the manner of Breguet. This arrangement proved unsatisfactory and the weight was then pivoted at the centre of the movement. This position is now accepted by many makers as the most satisfactory. The hands were set by rotating the knurled bezel and so the stem was eliminated.

Harwood took his watch to Switzerland with the hope of persuading Swiss manufacturers to produce it in quantity. The Swiss, with a conservatism that rivalled that of the early English makers, saw no future for the invention, and Harwood returned disappointed to England.

Back in England he had the good fortune to secure enough capital to cover the cost of tools and labour for a new effort to start manufacture and, thus ensured against financial loss, the firm of A. Schild S.A. of Switzerland undertook the manufacture of the watch. Its production entailed many problems which Harwood’s application and energy eventually overcame. This effort culminated in his personal assembly of the first three dozen movements. With success in the venture seeming certain, factories were established in France and America, with a head office in London. It was a cruel blow to a spirited and determined enterprise when the world trade slump of 1931 caused the company to cease activities.

The Autorist wristwatch, an earlier invention by Harwood, relied upon the movement of the wrist, causing the strap to pull against a pivoted retainer, in turn connected to a lever within the movement which kept the mainspring fully wound. Not as successful as his later invention, it was never developed further.

John Harwood was awarded the Gold Medal of the British Horological Institute in 1957 for his development of the automatic watch. He died in August 1964.