Paving the Way for Horological Instruments

Home / Clocks and Watches / Paving the Way for Horological Instruments 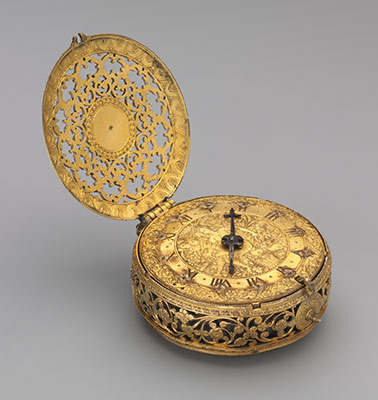 Imperfection in the adjusting and regulating of movements did not prevent craftsmen of the XVIth and XVIIth centuries from making exquisite watches, and horologists began to congregate in certain well-defined centres.  The fact of being able to share technological knowledge and experience, caused the rise of what back then may be termed as the ‘School of Watchcraft.’

There were professional groups of this kind in Paris, London, Blois, Geneva and in Germany, and all, in ‘Pre-harspring days’ – (that is to say before 1674) produced remarkable beautiful horological instruments.  Some very handsome specimens of their work are extant today, the heritage of a period which witnessed the development of all the arts under the patronage of a brilliant and luxury loving society.  The refinement and elegance of the times, the increase of wealth, the splendour of princely courts, all served to stimulate the craftsman and artist.  Under such suitable conditions, the creative imagination of the artisan could thrive and expand.  Methods of work were such as to allow him to give full rein to all fantastical and innovative ideas to variations of themes.  Watches were made in different shapes and abundantly ornate.  The cases were chases, enameled, exquisitely painted with reproductions of the works of great masters.  The earliest type of lady’s watches were shaped in the form of a cross and worn either as an additional ornament or merely as a pretext for a rich and heavy necklace.

Huyghens, the famous XVIIth century physicist, invented several devices which made it possible to regulate the performance of clocks  by a pendulum, and that of watches by the hairspring.  His discoveries were a revelation to horologists of his time.  Indeed, Huyghens laid the foundation of scientific horology.  He paved the way to the threshold of precision as we know it today.